A breathtaking place where one can spend ones holiday in outstanding Tuscan villas: this is the Val dOrcia. A wonderful land dotted with striking farmhouses on the top of small hills or located in a lovely valley which have been mostly renovated and converted into comfortable apartments for rent in Tuscany. But this area is something more: a valley of gentle hills, occasionally broken by gullies, the Val dOrcia is a cradle of history, culture, memorable wines and emotions. It is a landscape of hills, furrows and cypresses which proudly crown isolated farms or outline uphill, winding roads. An image which has become familiar through its depiction in works of art stretching from the Renaissance paintings to the modern photographs, for this reason in 2004 it was added by UNESCO to its list of World Heritage Sites. On the hills, hamlets of extraordinary charm overlook oak woods, olive groves and vineyards where the Brunello di Montalcino, counted among the most prestigious of Italian wines, is produced.
The river, from which the area takes its name, is just a stream, generally drying up in the summer heat. Springing from the hills near Radicofani and Sarteano, it later winds westward, skirting the hills of Pienza, San Quirico and Montalcino. The waters streaming on the surface shape the landscape and the ones springing from the heart of the volcano offer the visitor the wellbeing and the pleasure of the spa waters at Bagno Vignoni and Bagni San Filippo.
A visit to some of its picturesque towns and villages is worthwhile.
Pienza was rebuilt as an ideal town in the 15th century under the patronage of Pope Pius II, earning the definition of touchstone of Renaissance urbanism, and for this reason has been designated in 1996 a World Heritage Site. In fact, in 1458 Aeneas Silvius Piccolomini, who was later to become Pope Pius II, decided to transform his childhood home into a symbol of the Italian Renaissance. In three years, from 1459 to 1462, the town became an architectural landmark, thanks to the Assunta Cathedral and to Palazzo Piccolomini, characterized by a loggia, offering a spectacular view over the Val d'Orcia.
Montalcino is small town situated on a hill covered with olive groves and the famous vineyards producing the Brunello. It is the wine of kings and the king of wines, offering constantly evolving olfactory notes and a nervous yet full bodied flavour, able to challenge time and to remain timeless. Inhabited in Etruscan and Roman times, Montalcino became a commune and later fell under the influence of Siena and Florence. Surrounded by walls, it offers on its highest point a pentagonal plan fortress, which incorporates other structures, such as the keep of Santo Martini, the San Giovanni Tower and an ancient basilica, now the fortress chapel. Following the narrow, short street from the main gate of the fortress one encounters the Church of SantAgostino with its simple Romanesque façade. Next to this is a one-time convent, today home of the Civic and Diocesan Museum holding various masterpieces, including a Virgin and Child by Simone Martini and a St. Peter and St. Paul by Ambrogio Lorenzetti. The charming medieval Piazza del Popolo houses the magnificent Palazzo dei Priori, fine example of Sienese architecture, as well as a structure with six round arches called La Loggia.
One of the most important European pilgrim roads, the Via Francigena, crosses the hills and passes under the cypresses of the Val dOrcia. In the Middle Ages extraordinarily fascinating churches and abbeys were built around this road. An example is Saint's Antimo's Abbey, one of the most important Benedictine monasteries in Tuscany, originally commissioned also to act as a hotel for the pilgrims directed to Rome. A tradition, unconfirmed by historians, has it that Charlemagne, between 774 and 781, received from pope Hadrian I the relics of Saints Sebastian and Anthimus, and then donated them to the abbey when it was founded: the abbey of Sant'Antimo, which strongly recalls the great French Romanesque churches. Of the Carolingian edifice, the apse and the portal, richly decorated with animal and vegetable motifs, are visible. Also, typically French in inspiration, is the ambulatory with radial chapels. Notable is the so-called capital of Daniel in the Lions hole, work of the French Master of Cabestany, which shows, on one side, Daniel praying between the hungry lions and, on the other sides, the lions devouring the accusers.
Further southeast, at the southern border of Val d'Orcia lies a highly impressive fortress, a gateway from the Grand Duchy of Tuscany to the Papal territories, this is the main landmark of Radicofani. Though the site was used by the Etruscans and Romans, the fortress, of Carolingian origin, was built only shortly before the year 1000. Home to the notorious 13th century outlaw, Ghino di Tacco, it has been modified several times and, in the 16th century, reinforced with bastions capable of withstanding artillery fire. Its tower, rebuilt in the 20th century, offers an extraordinary view over Val dOrcia, Amiata, the Apennines and the Trasimeno and Bolsena lakes. The 13th century San Pietro and SantAgata churches contain a considerable collection of Della Robbia terracotta works and wooden statues.
Visit this fresh and unspoilt area, one of Siena's most precious treasures. 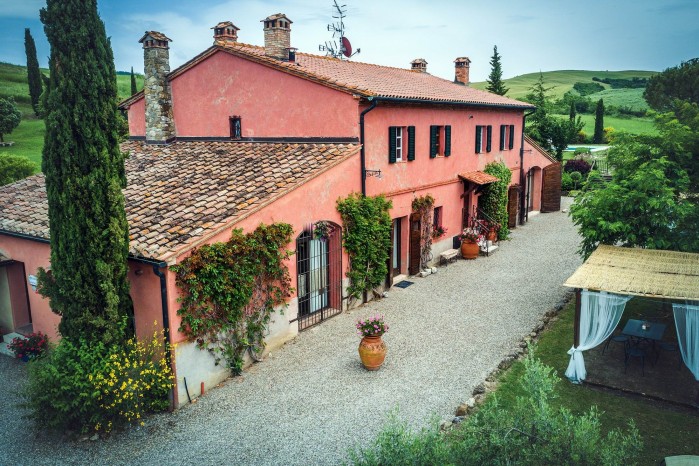 This beautiful holiday home in the Val dOrcia, surrounded by gently rolling hills, is near Castiglione dOrcia (12km), just a few kilometres from the famous spa waters at Bagno Vignoni (10km) and Bagni San Filippo (7km). Surrounded by peace and quiet this lovely farmhouse is on two floors and can comfortably accommodate up to 17 people. On the ground floor there is a large hall divided int
[Continues..]
Accommodations 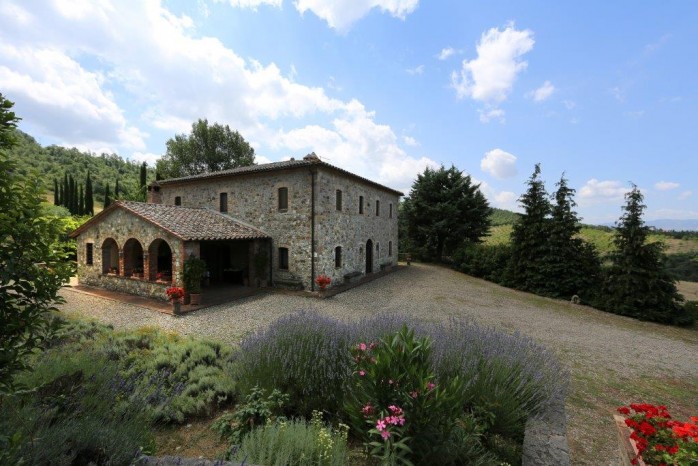 This beautiful villa for rent in Italy is located on the border between Tuscany and Lazio near the spa village of San Casciano dei Bagni (9km), member of the most beautiful villages in Italy, I borghi più belli dItalia, association. Originally the hunting lodge of the lords of the Castle of Proceno, this villa sits on a hilltop overlooking the serene Tuscian countryside, where v
[Continues..]
Accommodations 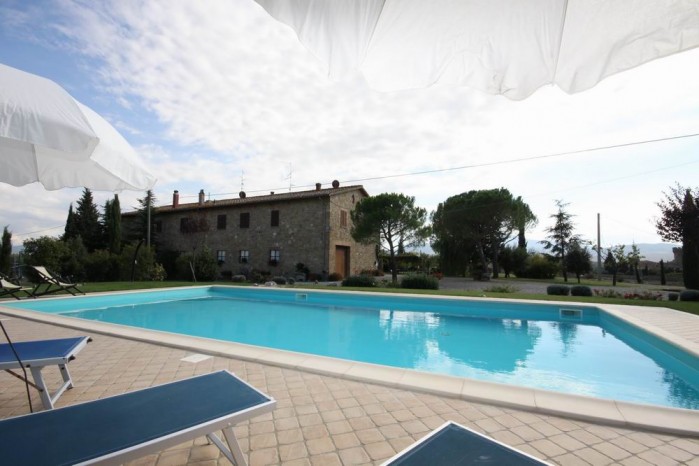 This lovely holiday home in Val dOrcia in the Middle Ages was probably a resting place for pilgrims travelling on the Via Francigena, that passes nearby. Furthermore, opposite the property is the 13th century Castello di Spedaletto, one of the most important monastic granges of the Spedale Santa Maria della Scala, the key religious and political foundation of the Republic of Siena which as
[Continues..]
Accommodations 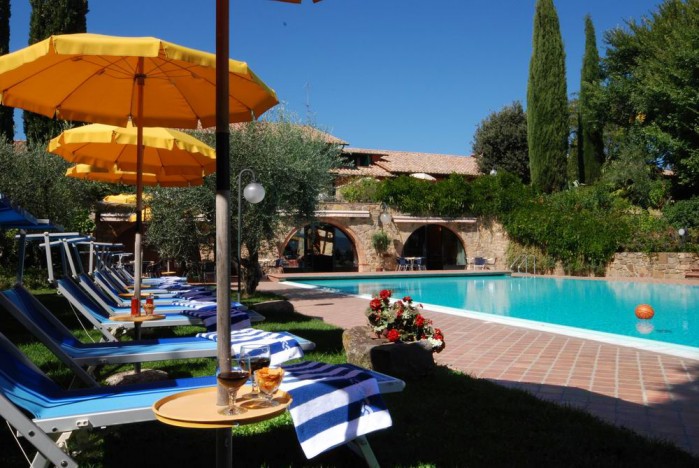 These wonderful accommodations in the Val dOrcia are situated in the oasis of the gently rolling hills just outside the medieval village of San Quirico dOrcia, in the past a resting place for Popes and their legates on their journey towards Rome along the ancient Via Francigena. An overwhelming 180 degrees view over the Natural Park of the Val dOrcia, embracing also the towns of Pienza,
[Continues..]
Accommodations 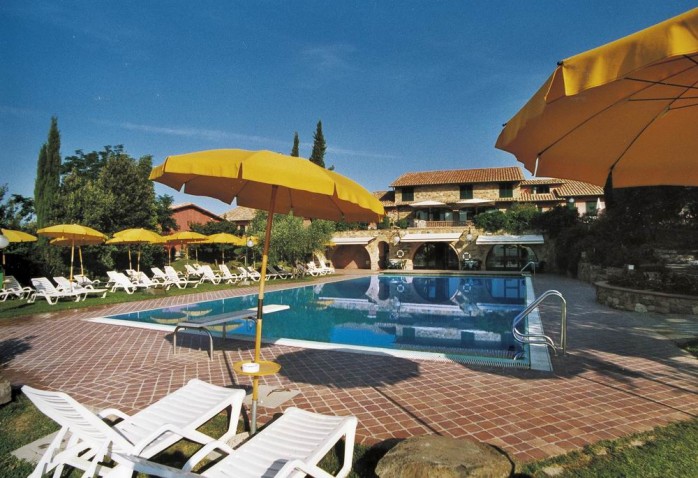 These wonderful holiday apartments in the Val dOrcia are situated in the oasis of the gently rolling hills just outside the medieval village of San Quirico dOrcia, in the past a resting place for Popes and their legates on their journey towards Rome along the ancient Via Francigena. An overwhelming 180 degrees view over the Natural Park of the Val dOrcia, embracing also the towns of Pie
[Continues..]
Accommodations 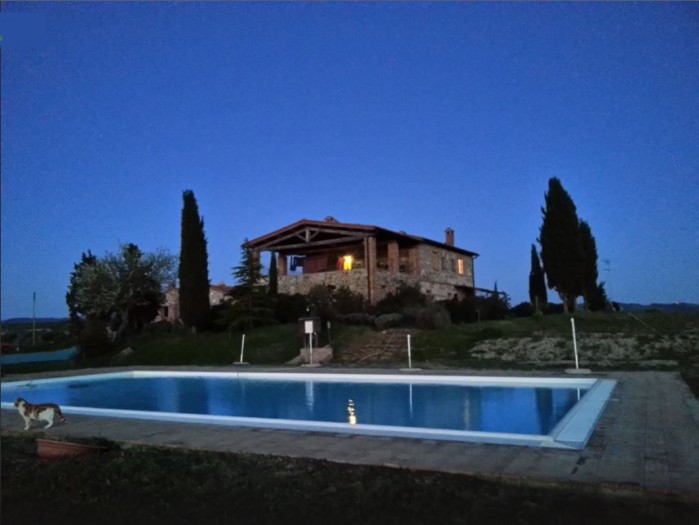 This lovely holiday home in Tuscany is located a km from Gallina, a tiny hamlet near Castiglione DOrcia (at 7 km), on the famous Via Cassia, the ancient Roman road connecting Rome to Florence. Built during the first half of the 20th century, this comfortable stone farmhouse has recently been restored with particular attention in maintaining the traditional Tuscan characteristics. The holid
[Continues..]
Accommodations 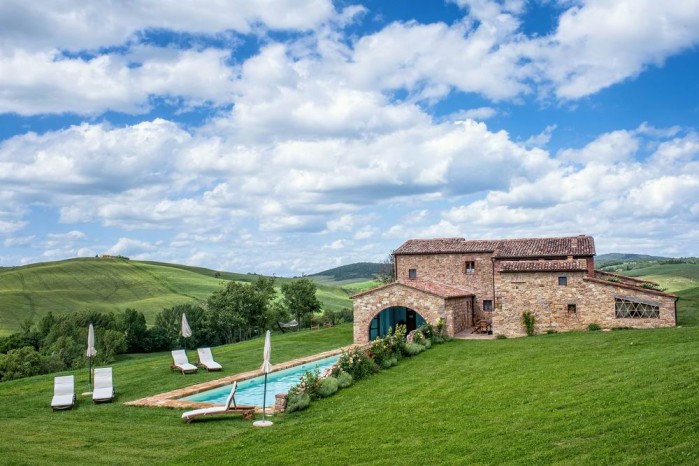 This lovely 18th century villa with swimming-pool in Val dOrcia is located near Pienza, surrounded by the gently rolling hills of this magnificent countryside. This tastefully furnished villa can comfortably accommodate up to 15 people and consists of 2 large sitting rooms, 2 fully equipped kitchens and one dining room. There are six double bedrooms (of which 1 can be made up as twin), 2 s
[Continues..]
Accommodations 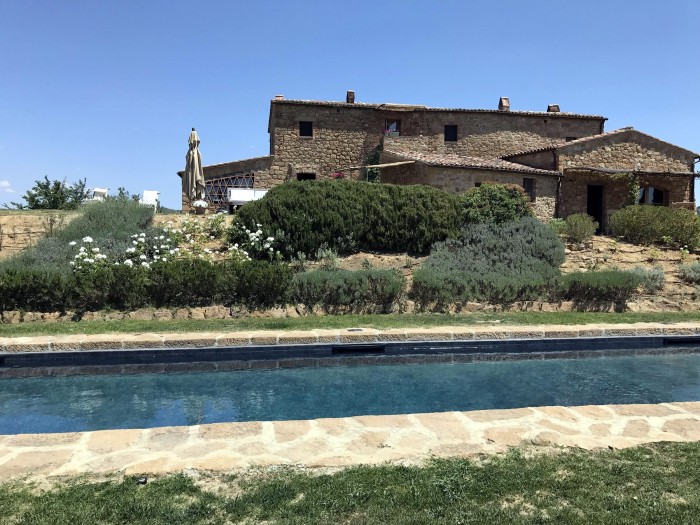 This magnificent holiday villa with a heated swimming pool sits on one of the knolls at the foot of Pienza (3km) with a breathtaking 360-degree view over the Val dOrcia countryside. The villa, 480 sq m, is a tastefully restored stone farmhouse, beautifully furnished in a fine country style, and can comfortably accommodate up to 12 people. It is surrounded by a large garden with gazebo, where one
[Continues..]
Accommodations 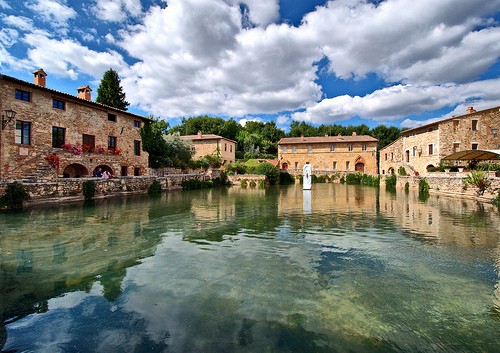 This cosy holiday flat is located in the centre of Bagno Vignoni, a town situated in Val dOrcia and renowned for its hot springs. The living room windows overlook the famous square with the large rectangular thermal pool admired in so many photos. In winter, the steam of this water basin creates a magical atmosphere. The flat is in one of the medieval stone houses in the square. The main door ope
[Continues..]
Accommodations

Beautiful 14th-century building located in a small square of the enchanting spa village of Bagno Vignoni. The house has been restored maintaining the traditional characteristics of the Tuscan style such as the wooden beam ceiling and the old terracotta tile flooring. Pick your favourite from the 6 romantic rooms of the B&B. Each with its own colour and a particular touch: an ancient coat of
[Continues..]
Accommodations